Albuquerque can be a cold place 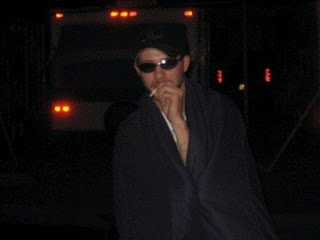 Wrapped in a comforter, vision obscured by dark sunglasses, Chad Wetzel smoked a cigarrette outside of a 7-11 at 4 a.m. last week in Albuquerque.

I had just driven us from near Amarillo to New Mexico, where we learned the desert can be a cold, unforgiving place at night. With no gas stations open near the exit, we moved further into the city, where a squat woman sold me $40 in gas through a latched window.

Before pumping the gas, I made sure to wake up Chad, who works third shift and had been preordained to handle the roughest splotches of driving. He had been sound asleep on the cooler for a solid four hours before we roused him.

"Wake up douche, it's time to drive," we yelled, hitting him in the head and shaking him. Douche may not have been the exact word, but it either that or one of the other terms male friends use with eachother.

"Alright, I just need a smoke," he said. As Chad sucked down the cigarette we all ran around wildly outside disgusted with the temperature, which we assumed would be brutally hot at all times of day.

This was just one of the stops we made. Every six hours we gassed the car, drained our bladders and waited for Wayne to move his bowels. Clearly, much happened along the way. I drove over a curb, a gas third shift gas station clerk cursed at Wayne for buying three suckers with a debit card, and a weirdo in Flagstaff, Ariz., told me the next time I eat at Denny's I will certainly get food poisoning.

The road was part of the fun of this journey. Going there was more than bearable, what with the sense of anticipation and none of us having previously travelled that route. Going back was fun as well.

On a stretch of Arizona to New Mexico highway we caught one of the most beautiful sunsets I have ever seen. With Arcade Fire serenading our view, we all sort of dropped silent for a while as the red sun bathed nearby bluffs, mesas and valleys. Someone may have commentted on how at peace we all were after such a brillant weekend, or maybe that's just my mind filling in the blank that doesn't need to be said anyway.

This was a once in a lifetime trip, it hurts to realize that. 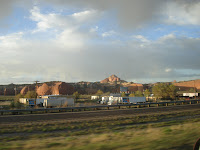