One guy enjoyed Rage more than me 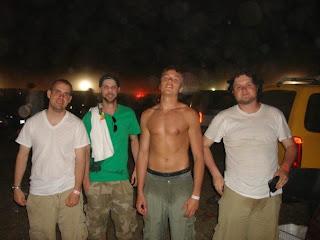 A horrible smell assaulted the Rage pit at one point during the perfomrance. I bristled immidiately, knowing exactly what it was. Then the people around me noticed it as well.

"Who farted?" someone asked.

And it wasn't. Without a doubt, someone in the Rage mosh pit near the stage slightly to the left soiled his pants. Then my inner monologue spoke up: "Uh-oh, that wasn't us was it? We need to check."

It wasn't. But the event raised many questions when I looked back at it during the car ride home. When this guy gets home, he has the most interesting description of how the show went.

"Hey man, Coachella huh? That must have been really great, what with all the bands and all. Wait, woah! Didn't Rage reunite, shit bro, how was that?"

"Wow, so they were good huh? Phenomanal even?"

I was also left with several qustions after this happened. All through the show people were bailing from the pit, having us hardcore dudes lift them over the crowd to safety. But when the smell came, no one stepped forward. The culprit probably hoped to keep attention off him, so he kept moshing with shit in his pants? Gross.

Still it speaks to the power of Rage's reunion that a man lost his bowels during the show. The pit was truely intense. I felt as if I were fighting for my life the entire time. I will be surprised as if anything in my life causes this sort of fear again. Still, best show I've ever seen. Don't know how anything could top this.

Here's a photo of the crew, reunited after the show.
Posted by Zack Q at 4:23 PM

this part of the story should also include a part about how the guy on the right in the photo apparently thought Rage was so good that he pissed himself.