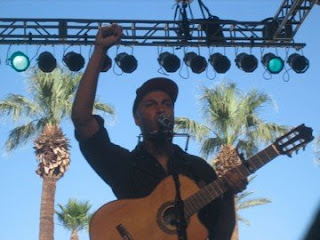 Clad in a thick shirt and dark jeans during the hottest part of the desert day, because "you never know when the tear gas will start falling," Tom Morello became the Nightwatchman before our eyes Saturday.

With protest and anthem songs reminiscent of the 60s and 70s, he had a capacity crowd inside the smallish Gobi Tent singing along with every word. Morello, a master of the electric guitar, plays a decent enough acoustic and sings in a fitting gutteral style. The Nightwatchman falls far short of Rage, not that Morello wants to replace his old band. But the over the top persona and point he strives to make hits home hard.

He played many of the songs off the newly released Nightwatchman album, teasing us on one occassion when he ripped into his piercing part of Rage hit "Bulls on Parade." Tim, Chad and I had come an act early to make sure we'd be up front for this while Wayne planted himself at the main stage waiting for Arcade Fire. By the end of the set, I was ecstatic we had stayed.

About half way through, Tim turned to me. "Zack's back there," he said, referring to Rage's lead singer who we of course would have liked to have seen a day before the reunion show. Tim spotted an afro and assumed it was de la Rocha. Instead, it was Boots Reiley of the Coup.

Morello brought out Boots and former Jane's Addiction frontman Perry Ferrel to rip through Woody Gunthrie's "This Land is Our Land," adding pro-revolution verses of course. Never in third grade did I think this patriotic song we learned in music class would end up on my lips as I sang in unison with hundreds of other dissillusioned young people. It was powerful to say the least.

My fingers hurt from being crossed too hard in hopes of a new Rage album. Deep down I realize a fifth album from my favorite band holds the likelihood of me walking on the moon. That said, I think I can settle with Morello's little side project, and a full-scale Rage tour, wishful thinking there. It's ridicolous to think music can spur wide-scale change, but thoughtful tunes can open eyes. 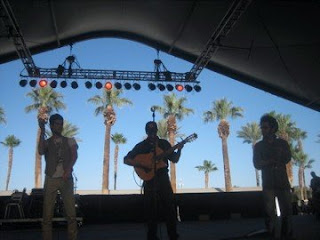