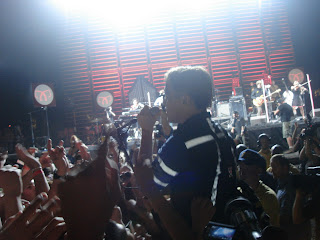 Despite not being able to move my arms for much of their set, Arcade Fire blew me away Saturday evening.

Playing the main stage just after sunset before the Red Hot Chili Peppers, this indie band from Montreal put on one of the greatest live shows I have ever seen. The passion was incredible and the crowd gave it back. We also met some cool people just before the show started.

Wayne had camped out most of the day and had a great spot by the front on the left. Chad, Tim and I spent our day watching Tom Morello's side project the Nightwatchman, and came late just before the Kings of Leon set. We met this Canadian guys who had a great plan to make it to the front.

"I'll just knock my way through and you guys follow behind me," one tall canadian with no shirt and a straw cowboy hat told us. "I'll just say sorry I stepped on your girlfriends foot bro, but these guys were pushing me."

The plan worked flawlessly. We followed this guy very close to the rail. Also, he had a hash nugget and ate it with a bottle of Gatorade after no one around us could offer a pipe. Interesting dude.

The pushing before Arcade Fire was intense. As 30,000 people behind us fought for our spots the crowd developed a sense of humor about the whole thing. "Don't give an inch. You shall not pass!" Became our rallying cry.

All in all, the fight was worth it. While nowhere near as intense as Rage or satisfying, the Arcade Fire has exploded in popularity and many news outlets reported on the quality of this show. Glad to say I was front and center, even if I was squished.
Posted by Zack Q at 8:08 AM