The day of D.W. and flamenco 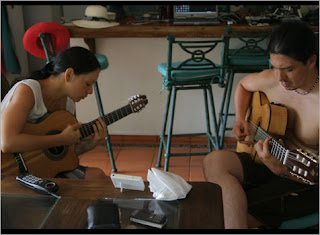 This man has driven a blue Nissan with no driver’s side window and a busted starter that lets anyone turn the car on, key or no. This man has forgotten his wallet and keys at our apartment and lived his life for a week without.

With a hermit-looking beard that makes one think he’s a second away from pulling the Ten Commandments out from somewhere, this man loves Rodrigo y Gabriela, a duet that covers classic rock with the Spanish guitar music stylings of flamenco. Wait, what?

After I publicized our planned trip to Coachella, I began to learn more about my friends' tastes in music. Many of them scoped the line up, and called or wrote to say “dude, check out X band, they rock.”

My younger brother likes Something Corporate side project Jack’s Mannequin. Interesting. A former co-worker likes the mellow tunes of Air. Not too unexpected. My roommate enjoys the catchy, pop tracks of the New Pornographers. Good, he can burn that for me. D.W. Norris, a sportswriter I once worked with who spouts always interesting and occasionally offensive, outrageous claims as he works, loves Rodrigo y Gabriela, the group that covers “Stairway to Heaven” with flamenco. Wow.

When I watch Rodrigo y Gabriela amazing the Coachella crowd with a Spanish guitar cover of a Metallica song, I will envision D.W. cruising through Carbondale in his busted up Nissan, garbage bag in place of window, blasting flamenco for all to hear.

“I don’t know what it is about that kind of guitar but I really dig it,” he wrote in a myspace message to me.