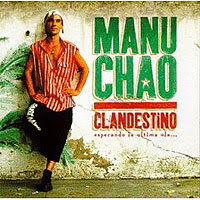 "Welcome to Tijuana, tequila, sexo, marijuana," so goes the chorus of the poorly-produced song I discovered on a pirated Bob Marley CD I bought a few days after New Year's at a street market in Mexico City. I learned few of the songs on said CD actually come from Bob Marley after I returned to the discomfort of my apartment in Carbondale, IL.

My roomates and I had a good laugh over the Tijuana song, especially given we had kicked around the idea of a trip south of the border during our upcoming voyage to Coachella. We listened to the track repeatedly during the next few days, until someone had the bright idea to look up the lyrics. That's when we discovered our garage-sounding, Tijuana theme was performed by Manu Chao, a name I swore I had seen before.

Where, oh where did I see that name? Bam! The Coachella poster! This guy will play at Coachella, where the organizers have enlarged his name on the promotional poster second only to Rage. Destiny wants us to take this trip, with a layover in Tijuana of course. I highly recommend checking out Manu Chao's performance of Welcome to Tijuana on YouTube. The guy is a gifted performer.

The plan calls for us to leave the confines of Southern Illinois University Wednesday afternoon, April 25. We drive without stop, arriving at Coachella Thursday around 5 or 6 p.m. We refuel with a few hours of sleep, and then we make the hours drive south for an evening in Tijuana. "Welcome to Tijuana, tequilla, sexo, marijuana."

Bienvenido a Tijuana! Bienvenido mi amor!
Posted by Zack Q at 10:10 AM