Unable to go to Coachella? Wayne laughs at you 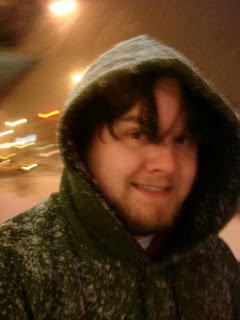 Wayne Utterback became the trip’s final addition, though perhaps its most logical. Of the four of us making the trip, none claim as much familiarity with the festival’s line up as he does.

Calling Wayne an educated and passionate music fan sounds accurate but would also make anyone that has met Wayne laugh at the formal description. Wayne, while tapped into most modern music, also owns a flame-patterned hat embroidered with the phrase “this hat has flames on it.”

Wayne, a Sparta native who currently works as editor of entertainment news at Southern Illinois University’s student newspaper, jumped on board the trip last. With our tickets already bought, we set about finding a fourth person to raise spirits and lower gas costs. I convinced Wayne to go with a myspace comment about the power of Rage’s reunion and an instant message conversation detailing the many perks aside from the excellent line up.

With tickets purchased and the trip set, Wayne often wanders the student newspaper’s offices throwing down his three day passes to Coachella and taunting those unable to attend the now sold out event. He also occasionally visits our apartment along the main drag of Carbondale’s poor student apartment complex Lewis Park. When Wayne stops by, we cook steaks, share music and often watch kung fu movies while proclaiming things ranging from “this trip is going to be so awesome” to “dudes, we’re going to Coachella.”
Posted by Zack Q at 9:11 AM