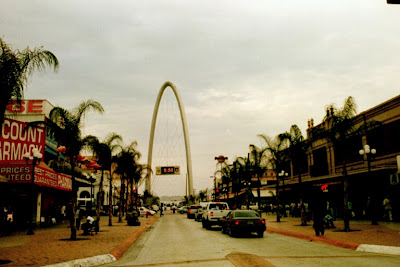 Don't be surprised if during the first week of May, American news channels start running non-stop coverage of the "Tijuana 3 crisis." And don't be shocked if the mugs they shoot across your screen are those of myself, Anthony, Tim and Wayne.

With this sort of trip, the chance for a major international incident runs throughout. Even as the day trip to Tijuana was born, we joked of such an occurence. So how do we go down? Kidnapped by Narcos? Probably. In a four man brawl with a mob of street women? Less likely. In a blaze of glory that starts in foot chase and ends with one dead, and three of us bound for Mexican jail? For sure.

But before all of that, the logistics must be ironed out. Having paid a few hundred dollars for the three day pass to Coachella, we hope to avoid missing any of the show. The idea goes like this. We drive straight through, no stopping, maybe with diapers like some sort of crazy, love lorn astronaut. We arrive at Coachella on Thursday afternoon, nap for a few hours and head to Tijuana that night.

Ahh, Tijuana the savior of those looking for prescription meds over the counter and women that will laugh at jokes while a paying man puffs a huge cigar. What better way to kick off the festival? Rested, relaxed and with a pocket full of Xantax. International incident be damned, we're heading south of the border.

Also, in the coming days look for profiles of those making the trip.
Posted by Zack Q at 8:26 AM