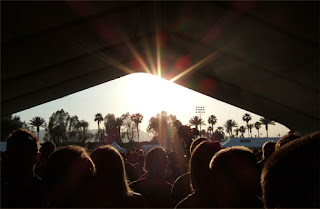 Some background seems to be in order. Picture this. It's January in the Midwest, cold sweeps the flat land, major entertainment acts stop in Chicago if at all, and people leave their homes to stop at the mall, a job or a stool in some bar with no dance floor and poor acoustics. You want out, especially if you've just spent three weeks around the holidays ridding your life of booze as you bum around Mexico.

You really want out after your roomate's cat has urinated on your bed for the second time in a week. Given that you have no energy to wash your sheets and your roomate spends most nights out, you settle in his room to read a bit of travel writing about the Caribean before bed. Bed, the stalwart of waking, which inevitably forces you to a high school in a rural community to report and write about wrestling.

The borrowed bedroom door opens and with it the chance for a story to tell grandchildren and the promise of a weekend to get you up and cleaning that cat piss-soaked bed. Rage Against the Machine, a reunion show, a late April festival in southern California. Your other roomate utters these words, after laughing about the cat urine of course.

Within 24 hours you have recruited a pair of friends and laid a plan. You will leave the Midwest. You will cover the hell out of high school wrestling if it brings the funds to run. And you will see Rage Against the Machine, the defining political rock band of your generation, play its first show in seven years. You will go to Coachella.

As the trip reaks of utter irresponsibility and implausability, a need to document seems crucial. This blog stands to do just that. Check back often for updates, pictures and randomness associated with this idea and this trip.
Posted by Zack Q at 6:44 PM