Money is no object 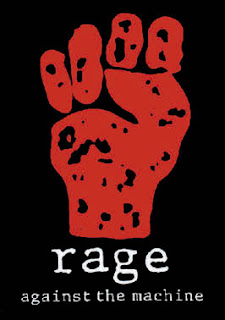 When I was on the fence about this trip, my friend Vince ripped me down with one arguement.

"I'll pay $400 to see Rage, I don't give a fuck," he said. And while not the most eloquent of statements, it was effective none the less. Sure, we plunked down about $330 for the ticket and four day camping pass. Of course we'll spend about $100 each on gas in transit. Then there's food costs plus whatever we rack up in Tijuana. By the end of this this, we'll have plunked down likely around or more than $500. Ouch.

But we get so much in return. Trip to Tijuana, awesome road trip through the southwest, dozens of bands live in concert, four crazy nights in the camping area and the coup de tat, if you will, the reunion of Rage. What kind of fan would I be if I bypassed that to save a few hundred dollars to fetter away at the Gap? Zack De La Rocha would have to kick me in the balls if I submitted to such a temptation.

Rage broke up at the height of their popularity. They haven't played a show in seven years. Tom and the rest of the machine have toiled with Chris Cornell in the mediorcrity that is Audioslave. Zack has galavanted around with the Zapatistas and other causes. There's a bunch of store Rage ready to explode.

So I could Sleep Now in the Fire, or I could Wake Up and Testify. On April 29, Rage returns and hits America like a Bombtrack blasting across television, magazines and Guerrila Radio. With all the other Children of the Sun I'm going with the Bulls on Parade to Coachella.
Posted by Zack Q at 9:04 PM