Manu Chao may save my life 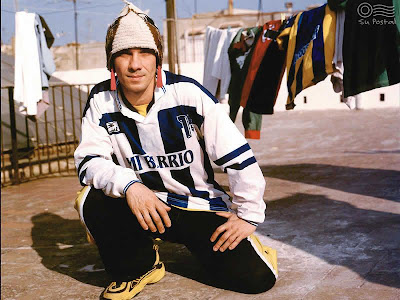 During a raucous, 2 a.m. on a Sunday night, two-man dance party hosted by the living room in my apartment, Tim and I recently rocketed Manu Chao to the top of acts we are excited about seeing at Coachella – excluding Rage.

I’m a firm believer in karma and coincidences for a reason, so when the Manu Chao song popped up on the bootlegged CD I bought at a street market in Mexico City for about 50 cents on Jan. 2, I instantly became excited about his presence at Coachella. Once I familiarized myself with his work and music, my antcipation intensified.

Forget about our outrageous free time for a moment, and indulge me. Tim and I browsed message boards for reviews of Manu Chao live shows and the phrase “that show changed my life” popped up frequently. One guy saw him in Amsterdam, another in New York City, but they all sung his praises loud.

Speaking of noise, Tim discovered this little anecdote. Kanye West stood to be the most high-powered show at Lollapalooza because the performance marked a hometown hero’s return. Yet West fizzled as 60,000 festival-goers looked on. Meanwhile, on a separate stage, Manu Chao rocked about 6,000 screaming fans. The anecdote Tim found pegs the noise level at six times that of the Kanye fans.

While we are fully prepared to spend most or all of Sunday entrenched in front of Coachella’s main stage, we will unhinge ourselves to catch Manu Chao. But what if his set time conflicts with that of Rage? A very real fear. I can only implore the same forces of karma and coincidence that brought the CD to me to keep the two acts chronologically separate. If my recent efforts to live a better, cleaner life have earned me anything, I would hope it would be to put Manu Chao on directly before Rage.

With a return trip to Mexico seeming less likely given my age and my friend’s attempts to immigrant before June, this could be my last shot at a meaningful, life changing experience for the time being. That may sound far fetched, but go to youtube.com and watch some videos of these guys performing live.
Posted by Zack Q at 10:42 AM