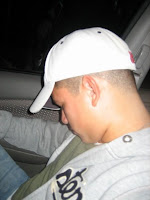 A 21-year-old Carbondale man boiled with rage early Tuesday as his roommates erupted with a raucous discussion of a concert they plan to see late this week.

Sam Banda, who moved to Carbondale as a transfer student at Southern Illinois University in January, asked himself a question as his apartment on the east side of town shook with action at 2 a.m.

"Where do you find guys like these?" Banda wondered.

The rare guys he refferred to are Zack Quaintance, the 22-year-old assistant editor of the Carterville Courier and the Herrin Independent, and Tim Dusza, a shift manager at Carbondale's popular Panera Bread restaurant. The behavior that spawned Banda's question befits males of much younger ages.

Quaintance began to shout himself horse just after 1:45 p.m. Tuesday when the Coachella Valley and Music Arts Festival, which he will attend Friday through Sunday along with Dusza, released its list of performance times.

"Where? Where? I can't find them," Dusza said, before Quaintance pointed him in the right direction.

None of this mattered to Banda, who had gone to bed early for the next morning's 8 a.m. computer course. As Quaintance screamed about the chance to see his favorite band Rage Against the Machine, Banda boiled with some Rage of his own.

"I can't wait until these morons are in California," he muttered groggily. The trip begins Wednesday at 8 a.m.
Posted by Zack Q at 12:46 AM