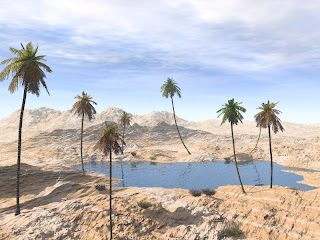 Never in 1999 did I think many outraged people criticizing the revitalized Woodstock festival for bowing to corporate sponsors and exploiting fans would somehow benefit me in 2007. I was wrong.

Concert-goers at Woodstock '99 complained about high priced bottled water - among many other deficiences - according to many accounts. Woodstock allegedly sold water for around $6, and that was in '99 when one could still buy a tank of gas for under a dollar. At the same time, the first Coachella, which was headlined by Rage, came on the scene that year in August, I read on the message board.

If message board mythos is correct (isn't it always?), Coachella organizers bumbled when they scheduled their event for August in the California dessert, where most things tend to die from excessive heat at that time of the year. But they hit a home run by excluding corporate sponsorship and incidentally selling thirsty music fans water for a $2 a bottle, which is slightly less obscene.

I love to bust this little tid bit out when people warn me about the "crazy high" prices of bottle water at festivals. Given the $2 cost, looks like I'll drop a mere $20-$30 a day on water to stay hydrated. That's better than the alternative, which is dying a terrible dry death with no chapstick and blistered lips. If that does come to pass, please mom, send me off with a closed casket funeral. I don't want to be remembered as the dude with dry lips.
Posted by Zack Q at 3:09 PM