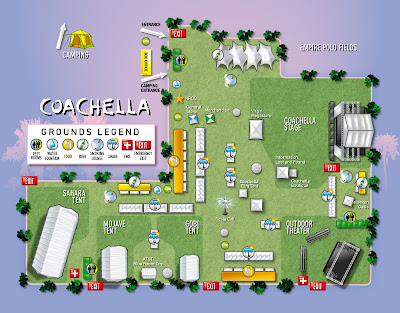 Music festivals, large and small, demand much physical exertion by their very natures.

When I band comes on, few concert-goers remain still. Why would one? It's a weird cat that goes to a show to stand and listen to music. So during a performance there's near constant movement.

With so many bands playing, it goes without saying that we'll be forced to hustle around the grounds to see as many of our favorites as we can. That's some intense exertion, especially given the toll of the dessert sun. What we will likely do is take the set times and a map of the grounds and plot our most efficent routes the night before.

While carefully downing bottled water at a pace designed to keep us hydrated yet save money and time in the portable toliets, we will also jump at chances to sit in the shade or enjoy acts in the tent.

Here's a map from last year's show, which is pretty much unchanged from those of the past. That means this is what the show layout will likely be this year.

Graphic taken from the Coachella message board.
Posted by Zack Q at 11:21 AM