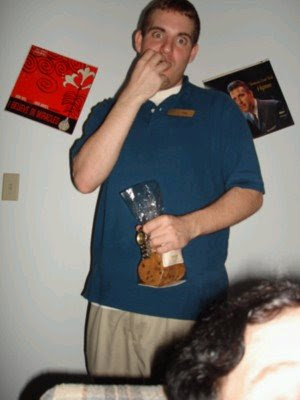 Wayne leads the field of unexpected and embarrassing photography. Here's his latest opus. Expect many such pictures taken during our drive and subsequent three days of rocking. Without further adue, here's Wayne's extensive photo caption.

When gearing up for the trip, it's difficult to imagine what obstacles we will have to overcome on the road to Coachella. We may break down on a stretch of highway, we could possibly be taken captive by hippies or if worse comes to worst, we'll have to stop a million times for restroom breaks. It won't be easy in the slightest, and much training has gone into preparing for such a journey (expect a montage video sometime soon.)

If one thing is for certain, though, it's that I never want to see Tim "The Tool Man" Dusza make the face witnessed in this photograph. To place this picture in the proper context, Tim arrived after a long night of battling the bread minions of Panera Bread Company. Holding a bag of highly coveted chocolate chip cookies, Tim could no longer resist the urge and temptation to take one for himself. I, being the pesky guy with the expensive camera that I take from my roommate like every single day because he's never awake to use it, snapped this precious photo of what appears to be Tim frightened out of his mind at how amazingly delicious such chocolate chip cookies are. As I looked at the picture further, I discovered a horrifying undercurrent that just now has become a dark cloud looming over the horizon.

In our long trek across the country, should this face make another appearance, it would only exist with Tim saying something along the lines of "how did we end up in Canada?" or "did I just run over a homeless man?" In either case, this face could only bring trouble... or cookies.

There you have it. We mean business about said montage vidoe. Expect it very soon.
Posted by Zack Q at 10:30 PM