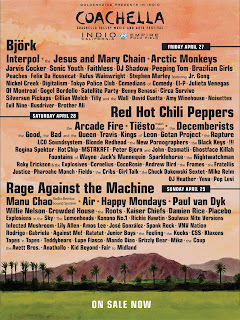 We assumed from the begining a few last minute additions would sweeten the bill further, not that the assembled line up lacked anything.

Rumors fueled our anxiousness. The Smashing Pumpkins, of course, rode high on our list of ideal bands, though that seems less than likely. Someone on the message board said Kanye West joined the bill so late last year that his name missed the poster. A simple check of the 2006 art proved that true.

So, with that said, and few days left until the show, it seems less than likely any similar artist will jump on. But then again, there stand to be enough time conflicts as is. We don't need anymore.

This image would seem to be the final line up for the event.
Posted by Zack Q at 1:50 PM