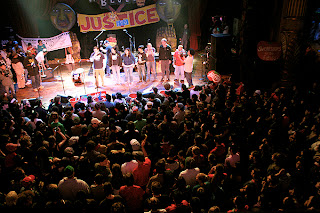 Zack de la Rocha and Tom Morello, the vocalist and lead guitar of Rage Against the Machine respectivly, teamed up this weekend at a rally against the mistreatment of farm workers by fast food giants. The protest actually affected a change.

Even before the rally happened on Saturday, McDonalds, then the target of the protesters, announced April 9 it would induce the following three changes:

1). The company will pay workers harvesting tomatoes a penny more per pound.

2). A stronger code of conduct based on the principle of worker participation will be enacted.

3). Both sides will embark upon a collaborative effort to establish a third party mechanism for monitoring conditions in the fields and investigating worker abuse complaints.

While McDonalds agreed to these terms, Burger King refused and drew the ire of the protesters. Being about as shallow as the rest of my generation, I paid these worthy changes little mind and scowered the internet for a review of Zack and Tom's performance. What I found was very telling. Most bloggers and even news sources concentrated on the cause rather than the music, which is encouraging.

Persistent readers of this blog will remember the panic entry spawned last month by an erroneous radio report that Rage would reunite at Austin, Texas, SouthbySouthWest rather than Coachella. Our group felt betrayed. This instance is different.

Zack and Tom played for a cause, sharing a spotlight with many speakers and other acts. The entity Rage Against the Machine has yet to grace a large venue stage since the band split in 2000. So cheers all around, these activists affected change and we still get to see Rage play its first show in years. Yes, our priorities are flawed.