Bathing, you have to do it 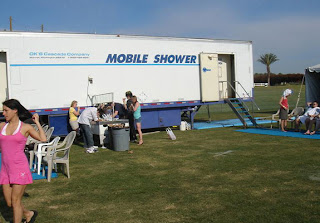 People seem to ask one question about this Coachella trip more frequently than all others.

Where are you guys going to shower? Everyone wants to know. Typically, I just furrow my brow, and say “shower?,” raising my voice at the end of the word in the traditional pitch of a question.

Every now and again I will answer. Apparently, the camp ground has a shower facility with hot water and individual shower stalls. While the lines get unruly at certain times of day, our only other option is the old bucket and bar of soap.

We will need to stay clean, mostly at night I imagine. Sleeping in a cramped tent with three others presents enough discomfort, we don’t need a tear-wrenching bout of BO to make it even worse.

Still, there is one time I refuse to shower. I will not bathe from the moment Rage ends its set late Sunday night, to the time Anthony and I stagger into Steve Hallock’s ethics class Tuesday morning.

I apologize to my classmates in advance, but there simply won’t be enough time or effort to wash up. Also, I don’t want the soap to scrub away the memories. It’s sort of like when someone’s crush kisses them on the cheek, causing that person to hold back on washing it for a few days.

I will leave Coachella saying, “I’m never washing myself again. I don’t want the Coachella to wash off."

Photo caption: A woman walks away from the shower trailer at last year’s Coachella. The trailers offer divisions for males and females with individual stalls. Picture taken from the Coachella message board.
Posted by Zack Q at 8:03 AM