One man with a laptop 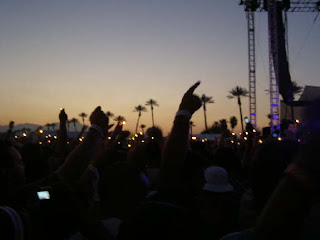 Girltalk is one guy with a laptop who plays songs and puts on one hell of a show.

Yes, it sounds like the lamest thing ever. No, it's not much different from Tim and I sitting around the living room, burning hours of free time and saying things like "dude, check out this song." But some how this one white guy manages to turn laptop full of tunes into lively live jamboree.

One viewing of a youtube.com video of this guy's performance at this month's South by Southwest Music Festival down in Austin, Texas may convince you as well. An unassuming white guy in a hoody, he comes on stage amid a barrage of cheers and camera flashes.

He right off tells the audience he appreciates the photographic interest, but he resents it as well, because this show is just as much about you guys as it is about him. He's not kidding either. By five minutes into the show, the guy is in the middle of the crowd, no shirt on, bumping with fans as they erupt crazy. He runs through the crowd, makes out with female fans and high fives anyone in the vicinity as terrible old dance songs blare behind him. I could spend a lifetime honing the craft of descriptive, entertainment-oriented, hype writing and still not do this show justice.

As always, I find someone on the Coachella message board has captured the situation best. Girltalk sits near the bottom of Coachella's Saturday lineup in small print. This guy on the board slung a statement at skeptics who prefer other small-type acts with guitars and an actual catalog of original music.

"Have fun watching the Frames or the Fratellis or some other bullsh*t," this guy wrote. "I'll be busy rocking my f*cking face off."

After watching this video and listening to a few samples from Girltalk, I plan to be right there with this guy. That's really an unexpected benefit of this Coachella trip, familiarizing myself with different music, artists and forms of entertainment. Tim and I spent an hour last night hitting the myspace page of every band on the Coachella poster.

We learned a few things. First of all, myspace has burrowed deep into the marketing side of the music business. With media everywhere writing about dismal album sales and a shift to the Web, myspace took that and ran. Every artist except one, had a myspace page with samples of music. From rappers, to punk bands to a bongo band from the Congo -- they were all on myspace. There's the future.

Photo caption: a large crowd watches a performance at a past Coachella. Photo taken from the Coachella Web site.
Posted by Zack Q at 8:56 AM