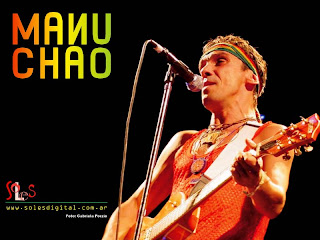 Manu Chao Radio Bemba Sound System has reached the apartment of Zack Quaintance, a 22-year-old fan who ordered the album more than a week ago on half.com and has spent every moment since wondering when it would come.

Quaintance, thrilled with his day already given the beautiful weather, unlocked his silver, apartment mailbox located just south of the Lewis Park office to find an album-sized package.

Giggling more than a grown man should, he raced back to his apartment, which sits near Lewis Park's entrance. Quaintance found his home empty, and surmised his roommates must be "doing something way lamer than dancing to Manu Chao alone."

The senior at Southern Illinois University Carbondale, who plans to graduate this May, played the album ear-smashingly loud despite being utterly alone. Within moments he broke a sweat.

For any interested parties, Quaintance says a raucous celebration of the disc's arrival will run pretty much non-stop until 2, possibly 3 a.m.
Posted by Zack Q at 3:05 PM