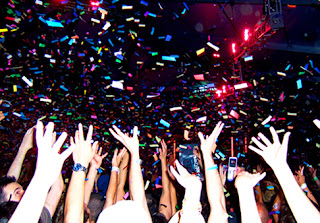 Here's Tim weighing in with some thoughts about the trip in general and the 10 acts he is most excited to see:

Ever since I came across an Internet article on the 2004 Festival, I had wanted to attend the epic spectacle that is Coachella. Two Days of music, art, and sun. It was like a fantasy that was just out of reach. Nobody I knew would be remotely interested in traveling half-way across the country to see a bunch of bands they have never heard of.

Once Zack told me that he was interested in going to Coachella, I knew we had to find a way to go. As soon as Anthony said he was in, making the trip affordable and feasible, I knew we were about to embark upon something special.

There is something strangely American about a group of friends jumping in car and taking a road trip through the American southwest. It’s been the topics of many books, paintings, and especially films. Twenty years from now, when I sit down to watch a film and the opening credits feature a group of friends speeding down the desert highway at sunrise, majestic mountains in the background, driving a beat up old jalopy, I hope that an involuntary grin spreads across my face transporting me back to what I hope becomes five of the defining days of my college years.

10) Ghostface Killah- I’m not that familiar with his work, but I loved The Pretty Toney Album and can’t wait for Zack to buy Fishscale so I can dive into that. I hope he is as energetic live as he is on his albums.

9) Happy Mondays- Due to scheduling issues, I’m probably going to miss out on seeing the reunion of the Mondays. If all is right in the world, they will play the main stage on Sunday just before Manu Chao. I’ve listened to Pills’n’Thrills and Bellyaches, and really enjoyed it, however from their depiction in the film 24 Hour Party People, their live shows look to be an absolute blast.

8) Decemberists- Whenever I hear Collin Melloy’s voice, my mind is instantly transported to 19th century Europe, and I am very curious to see if this is true at a live performance.

7) Interpol- There aren’t many albums out there that I consider perfect, but Interpol’s debut Turn on the Bright Lights, is up there. I’m not sure how their music is going to play to a festival crowd, but I know I can’t wait to find out.

6) New Pornographers- The fact that the New Pornographers, one of my favorite and most listened to bands, only makes number six on my list just shows of strong this line-up is. The band has perfected their studio sound, and while I am curious to see how it translates to the stage, I pray that the full line-up is present at Coachella. I could listen to Neko Case sing all day, and though I’ll be happy listening to A.C. Newman and company, I’ll be very disappointed if Neko’s majestic and powerful voice is absent.

5) Sonic Youth- Even having listened to it hundreds of times, “Teenage Riot” still makes me feel warm and fuzzy from beginning to end. Simply put, Daydream Nation changed my life. It was one of the first “indie” albums I ever purchased. If marijuana is a gateway drug, then Daydream Nation, along with Pavement’s Slanted and Enchanted were my gateway albums. They led me to a world of broader and more challenging music that I never would have discovered without them. The Yoof are older than I am, and despite the fact that I haven’t kept up with their entire catalogue, seeing them live has always been a goal of mine.

4) Bjork- I actually feel somewhat embarrassed about not being familiar with Bjork’s work. For years I have heard critics lavish praise upon her, but for whatever reason I simply never made an attempt to familiarize myself with her music. After listening to her first three solo albums pretty much non-stop for the last 3 weeks though, I can safely say that Bjork has me hooked. While it won’t be a full moon on Friday night, I pray that the night is as majestic as Bjork’s music.

3) Arcade Fire- Almost two years ago, I discovered a little album called Funeral that instantly grabbed me and still hasn’t let go. Still, some of the material on Funeral doesn’t seem as though it could transfer to the festival atmosphere. Fortunately, the yet to be released Neon Bible is full of mostly high energy and up-tempo tracks, and while the album doesn’t pack the same emotional punch that Funeral did, there is no doubt in my mind that these tracks sound spectacular live.

2) Manu Chao- Six weeks ago, if you had uttered the two words “Manu Chao”, I would have stared at you blankly and thought that you were possibly speaking Portuguese. Since that time however, the man (and his band) have become a borderline obsession. The only foil in my attempt to learn more about the man is his impossible to manage Web site.

1) Rage Against the Machine- This really needs no explanation. Quite simply, without Rage, this trip isn’t happening. They are the reason why I plan to skip a week of school, put 3,600 miles on my car in 5 days, and plan to risk physical (and emotional) health in Tijuana. For as long as I have known Zack, we have dreamed of a Rage reunion.
Posted by Zack Q at 7:55 AM

Good post and this post helped me alot in my college assignement. Thank you as your information.