Wanye's must see bands by day 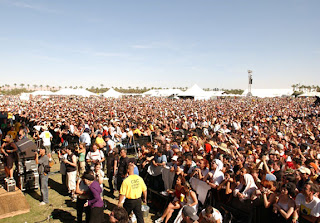 Wayne shares the bands he has to and would hate to see:

Ah Coachella, how you make me smile with your vast pile of performers. There are too many bands playing. With that being said, here is what I’m really looking forward to.

Bjork, It will be awkward for her to be performing without like a heavy snow drift cascading over the crowd, cause she’s like all cold and stuff. I’m guessing her set will be unlike anything else this festival offers.

Sonic Youth will be my blast of energy for the night. Considering the wall of sound they can churn out, I can’t imagine their set being anything less than overwhelming.

Rufus Wainwright, he seems like he’ll give a nice relaxed set or something fun, it’ll be a good way to have a good time without exhausting myself.

Interpol, since Friday looks like the weakest day, I’ll be sure to check these guys out. I liked their first album a lot and the second one wasn’t that bad. I’m sure they’ll put out a good show.

Of Montreal, simply because I liked their latest album and I feel they’ll give a high energy set that won’t disappoint.

I figure other folks like Peeping Tom and Stephen Marley will be acts I check out if I have time.

Friday’s bands I refuse to see:

Busdriver: If I wanted to listen to poorly done scat music, I’d go back to the Scatman. I don’t like him.

Circa Survive: I tolerated them at first, but they really are just a talented emo band, which is almost an oxymoron.

Artic Monkeys: With only one album and the usual British magazines claiming them as the “NEXT BIG THING OMFG!” I’ll pass on them. Give me a few more records and I’ll reconsider.

Mm I do love Saturday, where I will finally get to see the Arcade Fire play. It’s going to be a great and immersive show. They know how to fire a crowd up.

Decemberists, because I do love that sort of folksy stripped down sound they have.

Hot Chip, I will be prepared to dance to your addictive electronica.

LCD Soundsystem, I want them to play at my house, but Coachella will have to do.

Andrew Bird would be another person I have to see, I love every record he has put out.

Peter Bjorn & John, The Frames, !!!, Kings of Leon are all bands I will have to try and fit in.

Bands I would boo if I were caught dead watching on Saturday:

The Good, the Bad and the Queen suck. I don’t care if the lead singer from Gorillaz and Blur joined up with the Clash’s guitarist. It sucks, it’s lame and they are going to blow live.

MSTRKRFT: I really don’t like their album, nor do I like their name, there is no way I could properly say it without sputtering.

Rage, Rage Against the Machine! Need I say more? These guys and Arcade Fire are my two big draws to Coachella.

Explosions in the Sky. They are perfectly in tune with each other and it comes out on the record, I hear it’s also great live.

The same goes for Rodrigo y Gabriela, barring Rodrigo can get into the country. I can’t stop listening to their self titled.

Grizzly Bear because I love their sound and I love what I’ve seen them do live.

Tapes n’ Tapes. I have shown Zack how great they are with laying down the pipe… heh heh a double entendre. Seriously, their drummer used a steel pipe as percussion.

Manu Chao because of what Zack showed me. This is the perfect lead in to Rage’s set. The energy is going to be off the charts.

Bands that shouldn’t show up on Sunday:

VNV Nation: I’d need a crate of drugs to enjoy this crap and I hate drugs.

Damien Rice: I don’t know any of his stuff, but I hate his name. It sounds like a food platter.
Posted by Zack Q at 7:55 AM