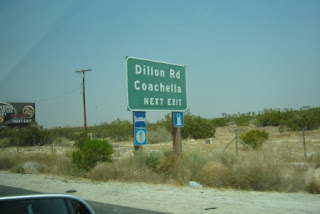 We will spend 27 hours in Tim's maroon 1990 Buick LeSabre as we careen towards destiny at Coachella. We must cross through Oklahoma, Missouri and northern Texas. Making matters worse, there's no time to lollygag, because we need every spare minute we can for our evening trip to Tijuana. In the spirit of such an adventure, here are some famous quotes, passages and sayings that are mildly applicable to our trip:

Road Trip is not merely something that college students do on weekends to alleviate the stress and boredom of college life. Road Trip is a way of life, a way of viewing the world around you, and a way of asserting your most basic and important freedom - the freedom of choice. Road Trip is NOT about staying in nice hotels, eating fancy meals, and spending lots of money. Road Trip is about letting your soul fly free on a jet stream of steel and concrete, experiencing raw adventure on the open road, living and driving by the seat of your pants, casting all cares and responsibilities to the wind, and submerging yourself in the exhilaration of life. ~Sir Richard’s Canonical Road Trip Web Page.

“What is the feeling when you're driving away from people, and they recede on the plain till you see their specks dispersing? -it's the too huge world vaulting us, and it's good-bye. But we lean forward to the next crazy venture beneath the skies.”” ~Jack Kerouac.

I travel not to go anywhere, but to go. I travel for travel's sake. The great affair is to move. ~Robert Louis Stevenson

Road Trip is a 2000 comedy film written by Todd Phillips and Scott Armstrong and directed by Todd Phillips. The film was based on life experiences by Todd Phillips and did quite well at the box office when it was released in 2000. A sequel was planned, but was later canceled by DreamWorks. EuroTrip is vastly similar and considered as sort of a rethinking of this movie, as it was made by the same people. ~Wikipedia, I don’t think this really has much to do with our trip, but whatever.

I have found out that there ain't no surer way to find out whether you like people or hate them than to travel with them. ~Mark Twain, we’ll see, now won’t we fellas?

Photo caption: A sign instructs travelers how to get to Coachella. Photo taken from the Coachella Web site fan gallery.
Posted by Zack Q at 7:33 AM