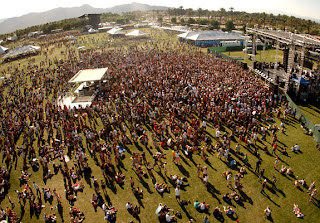 I've familiarized myself with quite a bit more of the music from Coachella, and as such I feel comfortable figuring out which bands I must see. With about 43 days left until the show, this seems overdue.

Of Montreal, I listened to their album "Hissing Fauna are You the Destroyer" about 20 times during a recent visit to my mother's house in the Chicago suburbs. This band caught me off guard with how powerful their lyrics are and the funky electronic music that underscores it. I particuliarly like the 11 minute gem "The past is a grotesque animal."

Interpol, the songs of Interpol's I like, I really like, but some of their stuff is just too mellow for me. Either way, I'll be front and center for these guys.

Bjork, watch her performance at Coachella a few years ago under the full moon and tell me you wouldn't be excited to see her live.

The Nightwatchman, Tom Morello's solo project. What kind of Rage fan misses this?

Hot Chip, infectious music for sure.

LCD Soundsystem, "Daft Punk is playing at my house" is more than enough reason here.

Arcade Fire, they're about to get huge. Just watch.

Red Hot Chili Peppers, sorry music snobs, they may not be the next indie band no one has heard of, but they have a catalog of great music that will be unbelievable played under the desert night sky.

Lupe Fiasco, he put out my favorite hip hop album of 2006.

Tapes N' Tapes, Wayne showed me a Youtube video of these guys playing a very high energy show in Paris. Oh yeah, and they were walking down the street as they did it. I can't wait to see them rocking out stationary.

Rodrigo Y Gabriela, flamenco band that plays excellent covers of Stairway to Heaven and Metallica's Orion. According to this week's Rolling Stone, they also put on a blistering live show.

Manu Chao and the Radio Bemba Sound System, the Mexico City coincidence that brought these guys to me is far too powerful to ignore. Plus I bought their concert DVD is amazing, maybe even rivals that of Rage.

Rage Against the Machine, the reason for the trip. The best rock band of the '90s reunites to bring their political message back for a new generation.

There are also a few bands I'm on the fence about, just because I haven't heard enough of them.

On Friday, it's the Arctic Monkeys and El-P. I haven't heard enough of the Monkeys and I'm holding judgement on El-P, who is cutting his second solo hip-hop album this month. Though I wouldn't call it pure solo because he has guest spots from an eclectic bunch of supporters ranging from Nine Inch Nails Trent Reznor to members of the Mars Volta, Yo La Tengo and TV on the Radio. We'll see.

On Saturday, I originally had both Kings of Leon and New Pornographers up on my list, but there's just too much. If they fit into the schedule fine. I don't think Ghostface Killah will translate well live, so he's out. This day suffers from almost too much. I like !!!, but no room. I need to listen to Sparklehorse and the Frames more before making a decision there. That still leaves out Peter, Bjorn and John and Andrew Bird. Curse you Saturday!

On Sunday, Infected Mushroom, Against Me!, Ratatat and Junior Boys have all been recomended to me, but my ears are full enough as is. I really like Explosions in the Sky, Air and Placebo, but I doubt there will be time. Also, Sunday seems like the day to distance myself from mellow indie bands and hear some good hip-hop, flamenco and high energy stuff in the desert.

Damn these organizers and there 60 plus bands. Seeing all my favorites is madness, and I know I'll miss some. Things will have to be plotted carefully once the set list comes out.

Photo caption: a crowd congregates in front of the festival's outdoor stage at a past Coachella. Photo taken from the Coachella Web site.
Posted by Zack Q at 8:42 AM