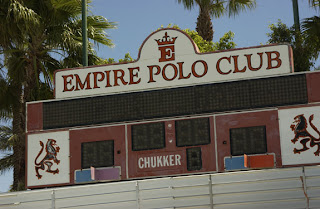 I lived across the street from a polo club in a lower to middle income Chicago suburb until I was about 12 years old. Around that time, the club closed and the towns people ripped it apart.

The club, located on Bloomingdale Road between North Avenue and Army Trail Road, was owned and operated by Harold Reskin, a wealthy man who helped build most of what is now Glendale Heights. When he got older, interest in the club fell off. Seeing as none of the people in the town could afford to play or care about polo, we did what you would expect. We walked through the broken up gates and stole anything of value left in the place. Looking back, just having a polo club across the street from my house for so long seems surreal.

Polo ranks among the oddest and most elitist in terms of sports. Yet I remember sneaking in through a hole in a fence to go watch it every once in a while. Also the wall that cut off the club and ran along Bloomingdale Road was lined by pillars with concrete horse heads on top. Many called this "Godfather Row" on account of the brutal scene in the Francis Ford Coppola classic.

Now years later, I will travel to a festival held mostly on of all things a polo field. I can't escape this sport.

Photo: Coachella takes place mostly on the Empire Polo Field in southern California. Photo taken from the Coachella Web site.
Posted by Zack Q at 9:11 AM