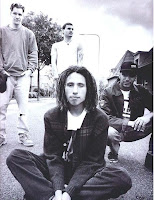 For the second time in the past year, Chicago area alternative rock radio station Q101 nearly altered the course of my life with erroneous news. On Thursday night, Tim called me in a panic saying the disc jockey on Q101 had said Rage was playing its first reunion show right then at Austin, Texas, festival South by Southwest.

I didn't want to pull Wayne into this crisis, but I was en route to a friend's house and had no access to the net. So I rang Wayne. After a quick net browse he reported that the radio station was wrong. Still, Tim called this unreliable dj, who said he had sources at the show saying the reunion was happening in Texas rather than Coachella.

My night was ruined. I soldiered on to my friend's place, where I was reminded about Q101 assuring Lollapalooza ticket holders that on the final day of that festival last year the Smashing Pumpkins would take the stage half way through the Red Hot Chilli Peppers Sunday set and play a triumphant hometown reunion show. It didn't happen, but what did happen was a legion of fans exsponged anger upon the Chili Peppers and the bogus reporting radio station. How do these clowns keep getting away with this?

The all star ensemble belted out songs from their various bands as well as some material off Morello's solo disc, according to news reports. Who cares what they played. The important thing is, even though they may have performed Guerrila Radio, Rage has still not performed a show in seven years. In fact, Rolling Stone reported this week that the group had not even rehersed yet.

Still, it was a very frightening few hours when we thought the reunion show was going down in Austin, rather than Coachella, and with Rage already playing three shows later in the summer, we had reason to panic. Who wants to see one of the middle dates of a reunion? Any music lover will tell you the money shows are the first and last performances. Now to get to my point, you should all either call Q101 and complain, or do as I will, and boycott them and their shoddy reporting.
Posted by Zack Q at 7:00 AM