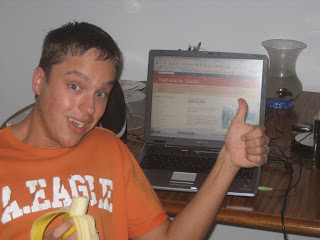 The number of posts on my blog matched up with the number of days left until the show for a few glorious hours today.

What is the significance of this? Probably nothing. It for sure means I have way too much time on my hands. But it could mean something larger.

I take it as further proof this trip was meant to be. First the Manu Chao coincidence. For anyone who hasn't read back through the 37 blogs preceding this one, I bought a Bob Marley CD in Mexico. To give you some idea of what sort of purchase it was, I got a CD-R, album art printed on a laser printer and a note that said "Mas que 200 canciones!" Months later I'm listening to this alleged Bob Marley CD, and I hear a song called "Welcome to Tijuana." The only lyrics? Welcome to Tijuana, Tequila, sexo marijuana. So I of course look this song up on the Internet and find it's done by Manu Chao, who is also playing Coachella.

Then the days left lines up with the number of blogs? Can you say destiny?

In all seriousness, a lot had to line up to make this possible. Tim just so happened to have a car with a mere 60,000 miles on it. A few days before I found out Rage was playing, SIUC sent me a refund check for twice the cost of tickets. Anthony had kicked around the idea of a country-spanning road trip for a few semesters and jumped at this opportunity. After months slaving at Southern Illinois' unreasonably demanding student newspaper, I fell into a job that would not only better my finances but also give me the luxury of time off. It all came together.

So here's to coincidences. Here's to savoring the last days of a college career. Here's to a last hurrah before becoming an adult. And here's to hitting the open road with good friends.

Photo caption: Zack enjoys a piece of fruit moments after noticing the number of days matched the number of blog posts. Credit Tim Dusza.
Posted by Zack Q at 9:40 AM