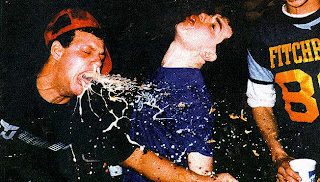 Get over it now. Yes, I spend too much time browsing Coachella message boards, but if I didn't do that I never would have found this gem of a story.

Somebody was asking how far in advance one should arrive in front of a stage to get a spot up front. One guy said get there whenever you want and you can push your way to the front. To which another guy said he would specially look for the first guy so he could elbow him in the side as he passed. This did not make the first guy happy. His response? The following, verbatim:

Meet me at the RAGE SET!!!1! Itll be lik Bulls are parading on your head brotha!!!!

We hope to avoid such unpleasantness.

Photo: taken from the Coachella message board. That guy is puking AND punching the other guy.
Posted by Zack Q at 8:15 AM