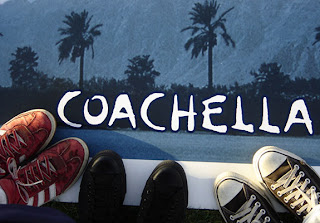 Wayne Utterback wrote the following text after I asked him for a post about his 10 favorite Coachella acts. Rage no. 2? I may never look at him the same again:

At the behest of Monsieur Quaintance, I have assembled the top 10 bands that I indulge with my presence Coachella.

10. Peter, Bjorn & John- The beauty of Coachella is to see bands you’ve only heard a little bit from. Take PB & J as a great example. They just released “Writer’s Block” to much critical acclaim. Now is my chance to see if they live up to the hype.

9. Hot Chip- Fun electronic infused pop straight outta London! These guys put on a crazy and fun show. I’ll be sure to put on the whitest of dance moves during their stage time.

8. Explosions in the Sky- If this band sounds as good as they are on their recordings, I’m going to be utterly blown away (hehe I said “utterly”.) These technically proficient Texas performers prove that you don’t have to have lyrics to say something.

7. Grizzly Bear- All I can say is search Youtube for their performances with director
”Lablogotheque.” Yeah… they can sing in a bathroom, think of how great they will sound in California.

6. Rufus Wainwright- I was smitten by Wainwright’s music the moment I heard his cover of the Beatles “Across the Universe,” and he’s only continued to amaze with each record. I have a feeling his performance will be a good time to be had by all.

5. The Decemberists- The Decemberists have been picking up steam lately with their latest release. They’ve been on the Colbert Report! I’ve always enjoyed their music, especially “Picaresque.” If they don’t play “Eli, The Barrow Boy” I’m going to punch all of them.

4. Sonic Youth- Thurston Moore and Co. have been a band that always captured my attention. With “Daydream Nation” they truly brought the grunge sound to the world, though Nirvana was the first to really mark major financial success with it. In fact, last year it was inducted into the Library of Congress' National Recording Registry, so yeah, they are important. Their latest album “Rather Ripped” rules too.

3. Bjork- Really Arcade Fire and Rage stand about the same along with Bjork. All three are playing on separate days, probably near the end of the day. All three will be performances I will never forget. Bjork will be the most unique of the three. She’s odd, she’s adorable and above all, Icelandic. I’ve always been a fan of her records and loved her videos, especially those with Michel Gondry and Chris Cunningham. I have a feeling that her presence alone will be awe-inspiring.

2. Rage Against the Machine- What can I say about Rage that isn’t already known? The most influential period of my life (high school) rotated around Rage, Soundgarden and Tool. These bands defined what music was to me. Rage, however, was always the most definitive of the three. Always with an important message, always getting in your face and always being unapologetic with what they said. When I and thousands of others scream “Fuck you, I won’t do what you tell me,” in unison, I’ll feel like I’m right where I belong.

1. Arcade Fire- I know, I know… it’s blasphemy to put Arcade Fire before Rage Against the Machine, but hear me out. Since the Arcade Fire released their first self titled EP, I’ve been in love with them. I have a severe man crush on Win Butler because he does what I wish I could; make important music while dressing like he is attending a funeral. I’ve missed so many opportunities to see this band. The first time I was to see them, my ride bailed on me. The second time I was to see them; I was told I had to work or be fired. After such a long and arduous journey, I shall see them at Coachella. All will be well in the world of Wayne.
Posted by Zack Q at 9:59 AM