How long? Too long. 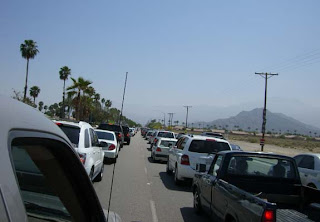 We’re in pain. Every second that still must tick off the Coachella countdown clock kills us. We’ve all coped in different ways.

I use this blog as therapy. The blog updates every morning. So when I find myself grimacing at the massive amount of time separating us from Coachella, I remind myself I still have more than 50 blogs to right.

My mind wanders away from the countdown. I conceptualize more blogs, I surf the Web for Coachella-related images and I wonder who all reads this daily.

Tim has added a Coachella countdown widget to his computer. At first, one would think this would seems foolish for someone trying to avoid being overwhelmed by a huge countdown. But one doesn’t know us. The widget just saves time. Without it, we would trudge to Coachella.com for our countdown. That’s more work and it makes the let down more severe when you eventually find out there’s still 58 days left.

Tim handles the countdown by breaking it into pieces. He can often be heard saying “we just have to get to spring break and we’ll go from there.” It’ll be interesting to see what happens when spring break comes and goes.

Anthony, he’s a busy guy, so the wait doesn’t hit him as hard. But we keep reminding him how long is left. And Wayne, I’m sure he savors the time until we go, rubbing his tickets in everyone’s face. He has photocopies taped to the top of his briefcase. Go ahead pick up your jaw and stop being shocked. That’s right, Wayne carries a briefcase.

As I prepare this post, 56 days stand between us and Coachella. Feels like I'm stuck in the world's most snarled traffic jam.
Posted by Zack Q at 8:19 AM