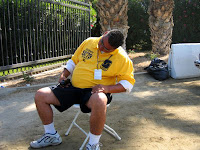 This trip has nothing to do with drug use.

Some people tend to think three-day LSD-fueled romp when they hear about a music festival, but the reality of Coachella is that it doesn't particuliarly lend itself to such behavior. The festival happens in Indio, Calif., which sits in the dessert between Vegas and Los Angeles. Our little crew will draw on every ounce of physical stamina we have to survive this trip. Any sort of mind-altering substance would hinder our attempt to get a tan, be comfortable and see as many bands as we can.

Besides, anyone familiar with us knows we are unlikely to candidates to indulge in that sort of thing. I don't drink, Wayne has never smoked pot, Tim is a respected front end manager at the Panera Bread Company and Anthony prefers Irish Car Bombs to any sort of acid trip.

That does sound a bit lame. A bunch of Rage Against the Machine fans crossing the country to obey the law? Not so. Any chance to get back stage will be taken. If someone topples the fence as in a previous year, I'll be right there with them. If Zack de la Rocha's return leads to a massive riot, I''ll be up front. But I need a clear head for such mayhem. Also, who knows what is to become of us in Tijuana.

The Coachella message board also makes clear that anyone found with drugs is out of the show. Driving two days and paying almost $400 to get thrown out of somewhere for having some weed seems like a total waste, when I could do much the same thing right here.

Photo caption: a security guard naps at a past Coachella. Photo taken from the Coachella message board.
Posted by Zack Q at 10:48 AM