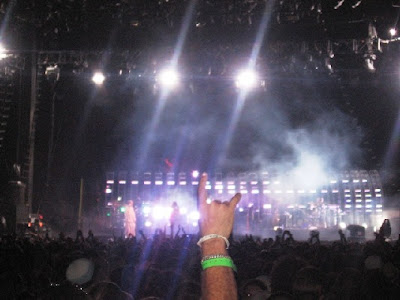 Here are the top 10 acts I'm most excited about seeing and some brief commentary about each:

10). Brother Ali, I kind of saw him once before. It was during my second and final year of junior college up near Chicago. I got hammered in my friend's car on the way to the show and had no idea Brother Ali was even performing. I familiarized myself with his work after I ran out of Atmosphere albums. He's an albino Muslim that plays on the same label as Atmosphere. His lyrics are also far better than Slug's, no surprise there. He was opening for Atmosphere actually when I got too drunk to realize he was on. I do, however, remember we went to Taco Bell after the show and pissed off the drive thru line when we started throwing empties out of the driver's side window. I really don't miss drinking.

9). The Red Hot Chili Peppers, I've been a fan of these guys since I heard Under the Bridge when I was in fifth grade or so. While I realize they are like any other commercial band, I still can't help enjoy their music. The band's latest double disc album has worn its way into my stereo. The lyrics aren't particularly deep, mostly stuff about Cali, but the music just makes me feel good.

8). The Nightwatchman, more out of curiosity than anything else. His fist single plays on my myspace page. Tom Morello plays guitar like few others and his guttural vocals bring even more depth to the sound on the first track. What I'm most interested in here is the political message he fuses to the Nightwatchman. Even if it's just an expansion to Rage's message, I'm still very interested. This guy has a degree from Harvard.

7.) The New Pornographers, Coachella has inspired me to familiarize myself with as much of its line up as I can. Thanks to Wayne and Tim, I've gotten my hands on much of the music and given almost all of it a quick listen through. This band really jumped out at me with its catchy melodies and feel-good, quasi-pop sound.

6). The Roots, The media often touts this band as hip-hops best live show. These guys are pretty infectious on their albums. I can't wait to see what they do in person. Plus they often feature Razel, one of the world's best beat boxers. I'd really like to see him live.

5). Bjork, another act I've gotten to know recently. She plays last on Friday, the first day of the festival. I can't think of a better way to cap our first full day in the desert than with Bjork's melodic performance. I hope it's a beautiful night.

4). Lupe Fiasco, the best new rap artist I've heard in I don't know how long. Food and Liquor could be my favorite album from last year. A Chicagoan and a skater, there's a lot for me to like about Lupe. Also, his lyrics are far smarter than most commercial hip hop I've heard as of late. His name is very small on the flier for Sunday, meaning we could see him early in the day with a manageable crowd. That'd be ideal.

3). The Arcade Fire, just listen to their music. I had their first album, Funeral, still on heavy rotation in my car and home when I got my hands on their sophomore effort, Neon Bible. That disc is spinning all day every day. A seven-member group from Canada, the Arcade Fire has wowed me more than any other indie band. I've watched youtube videos of their performance last year at Coachella as the desert sun set. It looked amazing, and rumor has it they will be playing at dusk again this year.

2). Manu Chao, please refer to the many other posts about why I'm excited for this guy. All I can say here is I'm impatiently waiting for the album and concert DVD of his I ordered off half.com to get here, and it's killing me.

1). Rage Against the Machine, the band that inspired this trip. I will camp in front of the main stage all day if it means being up front when these guys come on. Rumor has it, the last three acts on that stage will be Roots, Manu Chao and then Rage. I must devise a way to go to the bathroom and eat without moving from that stage.
Posted by Zack Q at 8:36 AM