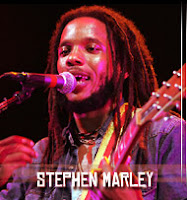 Of all the music I've waded through in preparation for Coachella's massive line up, Stephen Marley has wowed me more than anyother.

I'm not alone here either. Rolling Stone and Entertainment Weekly have both praised him as the most talented of reggae legend Bob Marley's more than 10 legitamate prodgy, there are allegedly more than 20 total. But as I enjoy Stephen Marley's debut album Mind Control, sometimes it's easy to hear Bob in his son's music. Even if this trip goes wrong in many ways, at the least I've found some enjoyable music I was previously unfamiliar with.

Other new musicians I was unaware of before the show but have since been impressed with include: Rodrigo y Gabriela, Manu Chao, LCD Soundsytem (a small part of the reason I must learn to dance, the larger part...chicks dude), Peter Bjorn and John and Tapes N' Tapes.

If this show is like any festival I've been too, my list of new artists I'm a fan of will grow massivly in the aftermath. Something to look forward too.
Posted by Zack Q at 8:37 PM