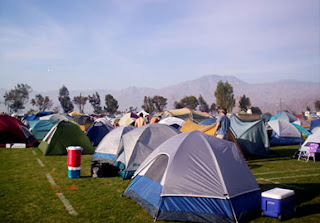 No one talks about it much, but the four of us will sleep three nights in a seven by seven tent. That’s what we’ve planned for lodging.

Really though, it was the most enticing choice. Our other options included paying for a hotel (what are we millionaires?), sleeping in Tim’s car (four men in a 1990 Buick LeSabre with leather interior in the California desert, enough said) or the camping area. We obviously choose the later.

Once again, my friend Vince Cicero, of Buffalo, N.Y., really nailed the situation when he said, “with those camping passes why would you want to go to Tijuana? The camping area will be much crazier?”

If my research rings true, he’s right. During the hour of my day in which I browse the Coachella message board, I have uncovered many stories of the camping area. Several campers tell of drunks assailing their tents. Others speak of sleep-shattering arguments between nearly-nude lesbian partners. I have a couple of favorite camping ground stories though.

One guy, when asked what a Coachella virgin should bring to the festival, advises campers to bring ear plugs, because ecstasy-fueled hippies often insist on playing bongo drums until 6 a.m. I really hope our plot sits far away from those people. Another guy has a story about the origins of an inside joke.

At last year’s show, some guy separated from his girlfriend and instead of looking for her, he caught an act with his buddies. The girl, who spent most of the show searching for this guy, took her aggression out on him after the show. According to this story-teller, every time the guy tried to talk, she cut him off with: “you know what? F*ck you!” To this day, the storytellers fried still say you know what? F*ck you.

Funny stuff. So we’ve bought our $45 for four nights camping passes and we’re all set to return with a series of stories of our own, which will hopefully rival those made famous by the message board. That sounds much better. Let's just forget we will spend four nights sleeping in a tiny tent.
Posted by Zack Q at 7:28 AM