Drop the guitar, grab the mic 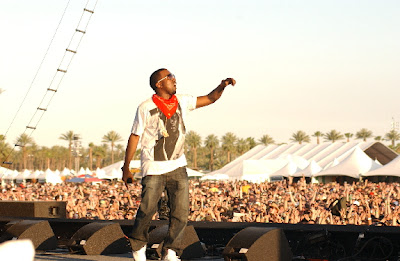 The organizers have signed on a collective of excellent hip hop acts to complement the army of indie bands on the ticket. For every Interpol, Decembrists and Explosions in the Sky, there’s an El-P, whose latest album shows a rare meld between rappers and indie musicians with guest spots from members of The Mars Volta, TV on the Radio and Yo La Tengo.

For the Rufus Wainwrights and Sonic Youths, there’s the Lupe Fiascos and Ghostface Killahs. While hip-hop often translates poorly to a live venue, it will be interesting to see what the festival atmosphere does for it. I’m hoping to see artists jumping in on one another’s sets. Maybe Brother Ali will come out and freestyle during DJ Shadow. What if a rad guitarist hits the stage and lays down some riffs for an MC to speak over?

This Coachella line up has the potential to feature some unique combinations. Let’s hope the artists take advantage of it.

Photo caption: Kanye West performs during last year’s Coachella. West, a late minute addition, did not appear on the flier, but he was one of the many hip-hop acts the festival offers annually. Photo taken from the Coachella Web site gallery.
Posted by Zack Q at 8:15 AM

Thanks for writing this.